This blog is about strong Latinx individuals creating better architecture and technology for the community, the people who make our lives what they are even though we never see them.

This is not a blog about ordinary people in the housing industry. It’s not about how to make your front porch look beautiful or how to use accessories to put your personal stamp on a home. This blog is about strong Latinx individuals creating better architecture and technology for the community, the people who make our lives what they are even though we never see them. See how Melissa Henao-Robledo, Siboney Díaz-Sánchez and Simón Borrero are impacting their fields and our culture. 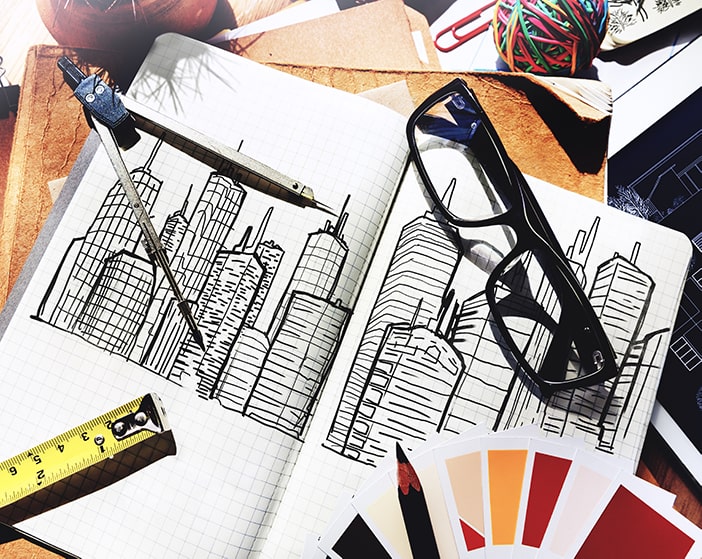 Melissa Henao-Robledo uses landscape architecture to transform ignored corners of our cities. The projects she tackles aren’t always on a grand scale like a government center or multiacre urban park, but the way they affect neighborhoods could be defined as life-changing.

In 2015, Henao-Robledo and her partner Sara Partridge were awarded a bus shelter contract from the City of Austin. The proposal turned a characterless corner into a community-focused pocket park. But why bother with a park when a bit of protection from the elements is all waiting riders really “need”? Because according to forward-thinking landscape architects, a strong community actually needs more.

The Metro Rail shelter Henao-Robledo and Partridge designed also included “a trail providing pedestrian and bicycle access to the station from the surrounding neighborhoods” as well as a rainwater harvesting system “to irrigate the native and adapted plants in the surrounding landscape, while the enhanced lighting and bicycle racks makes it easy for cyclists to switch from two wheels to four.” One solution addressed multiple societal issues – access to public transportation in underserved communities, sustainability, public health and wellbeing, placemaking and community building – showing the power of smart design.

Lifting underserved communities is something Henao-Robledo, who earned her master’s degree from North Carolina State University and also studied at Appalachian State University and the Pontificia Universidad Católica de Chile, works toward professionally with up-and-coming architects as well.

“An individual’s journey shapes their professional life,” she recently wrote for The Dirt. “But having a profession is not always the case for Black, Indigenous, and People of Color (BIPOC), who live daily with implicit bias resulting from systemic racism.”

Henao-Robledo has worked through Latinos in Architecture in Austin and the American Institute of Architects’ DesignVoice to encourage other minorities to consider a career in landscape architecture. She has taught landscape design at Austin Community College and is the Texas ASLA Chair of the Committee on Student Organizations. Her account in The Dirt outlines ways in which all businesses, not just landscape architecture firms, can do their part to create a diverse and equitable workforce.

Written at the height of the Black Lives Matter movement, Henao-Robledo continued in The Dirt: “I know what it means to feel afraid for the safety of my Black loved ones because they are identified by the color of their skin, not by their contribution to society, educational aspirations, smiles, love, and joy they bring to the world.

“During a protest in Austin, Texas, I was in awe and bewilderment to discover protesters had shut down Interstate 35, the same interstate that divided Austin to create a ‘Negro District’ via the 1928 master plan and subsequently was segregated by design to create a ‘ghetto for African Americas.’

“During the protests, as I stood there in my truth, in my brown privilege, I felt a tremendous sadness for the lack of diversity in the landscape architecture profession.

“Have you ever had to consider the lack of diverse representation of your race in your office, company, or profession? And the pain and sense of injustice it causes?

“By the year 2043, the U.S. Census Bureau projects the nation to become a majority-minority nation. My hope is practitioners will seize the moment and cultivate the future voices of landscape architecture that reflect the communities we serve.”

It’s impossible not to be political as a Latina architect, in Siboney Díaz-Sánchez’s eyes. With so few women and even fewer Latinx licensed architects in the U.S. – two in five new architects are women and fewer than one in five new architects identify as a racial or ethnic minority, according to the National Council of Architectural Registration Boards (NCARB) – the Texas native sees it as imperative to represent those of similar heritage not only in the profession but in the community as well.

Like Henao-Robledo, Díaz-Sánchez is heavily involved in promoting the field to Latinx youth and mentoring the next generation. She is a founding member of the AIA San Antonio’s Latinos in Architecture Committee with the goal of making design professions accessible, welcoming and inclusive to Latinos.

Beyond “carving out a space” for other Latinx professionals, she also fights to make sure Latinx community members are heard during her design projects as well. “It is our role as architects, designers, urbanists, and creatives to build for the public’s health, safety, and welfare,” she wrote in a 2019 article for Texas Architect magazine. “We can only truly do this if we talk and listen to the people we are designing for. We need to make our work more accessible, and we need to initiate public conversations sooner about projects that affect people’s lives.”

Those public conversations are what made people take notice when, in 2018, the Latinos in Architecture Committee (LiA) was asked to revive the historic Plaza Guadalupe. An important part of the community, the plaza was the site of a visit from late Pope John Paul II and hosts cultural festivals and family events. However, recent years had seen an increase in drugs and violent crime.

The original solution to these problems was to construct a fence around the plaza, controlling access. However, with the help of Díaz-Sánchez and the LiA, a compromise was struck. Working with Latinx and Hispanic community members, even those as young as middle school-aged, revealed exactly how the plaza fit into city life rather than assuming and misinterpreting cultural needs. It was a prime example of how culturally sensitive architects can and should listen to a community.

Apart from her involvement with LiA, Díaz-Sánchez works for Overland Partners, an architecture firm named a top 50 design firm and top 50 sustainable design firm by Architect magazine and that, according to The Mujerista at the time of the writing, employed 10 Latinx licensed architects, five of them Latina women. Díaz-Sánchez is also a board member of SAY Sí, a youth organization that promotes creativity as a force for positive change in marginalized communities. She has spoken at a number of conferences and written frequently on equality and cultural awareness in the design professions.

A graduate of Cornell University, Díaz-Sánchez is now a Rose Fellow “working on affordable housing development and placekeeping because they are inherently connected but often intentionally separated.”

Not much is certain in the wake of COVID-19. One thing that is for sure, however, is that we overwhelmingly rely on home delivery, whether it’s Amazon packages, groceries or meals. Unless you’re in Latin America, you probably aren’t familiar with one of the key players in this industry, Rappi, cofounded by Colombian Simón Borrero.

Along with Felipe Villamarin and Sebastian Mejia, Borrero created Rappi, an app-based grocery delivery service, in 2016. The mission: Improving the quality of life for those in Latin America, customers and couriers alike.

Rappi evolved from a couple of guys taking orders over the phone to an app with more than 80,000 registered users. Users swipe their screens to select products in “aisles.” Borrero, who studied business administration and then taught himself computer programming, says this swiping and the way products are organized in the app sets his service apart from the competition. Although they had been able to connect shoppers with stores that didn’t have much online presence and built partnerships with large brands, people still weren’t happy with the logistics of online grocery shopping.

Developing the virtual aisles for an easier experience was a matter of listening to customers and adapting the app to their needs. It’s not just about delivering groceries, however. Users can get anything from doughnuts to medicine to lunch, even cash, dropped off by one of Borrero’s couriers or “rappigrocers.” While it may seem that Rappi has its fingers in lots of different pies, it remains primarily a local business with deliveries usually staying within a one-mile radius.

“We are also trying to rescue the tendero de barrio — the guys who make a living from mom and pop shops,” Borrero told LAVCA, a non-profit venture capital organization in Latin America. “They were the most respected people in their neighborhood. They were honest people who sometimes lent money to their clients. People depended on them for a lot of small things. They knew everyone in the neighborhood, they helped them, and then cities got really big and people became disconnected. Rappi and its employees are becoming the people who help the neighborhood. We worked really hard on that, and they feel it, so they wear their jacket with pride.”

Rappi is doing its best to provide that neighborhood support in one of the most difficult global economic situations this generation has ever seen. As Colombia’s confirmed COVID-19 cases continued to increase to over 286,000 by the end of July, Rappi tested robots. It was the company’s attempt to keep customers and employees safer while maintaining its service mission. Early trials were successful, although Rappi, like most businesses in the South American country of 49 million people, are still struggling to adapt.

The user interface for the Rappi app has won numerous awards and Borrero has been named one of MIT Technology Review, Spanish edition’s Innovators Under 35 Colombia 2016.

These spotlights for Hispanic Heritage Month are part of a series recognizing trailblazers in home design, construction technology and business. You can read our previous installments published during Black History Month, Women’s History Month, Asian-American and Pacific Islander Heritage Month and PRIDE Month at the Schlage blog.