How to build a high tech smart home without sacrificing style

How to build a high tech smart home without sacrificing style

Home assistants can make any house feel more like a smart home, but how do you choose the best fit for your home and personal style? To figure this out, you have to weigh the function and appearance of these high-tech devices.

You can take the virtual assistant a step further by adding one to your house. You may have seen these home assistants in TV ads or on a tech-savvy friend’s kitchen counter. The small speaker-like gadgets are wirelessly connected to a kind of smart online software. Some examples of this software are Alexa and Google Assistant, which you can verbally ask to perform tasks such as telling you what the weather is like, scheduling meetings or playing music.

These home assistants can make any house feel more like a smart home, but how do you choose the best fit for your home and personal style? To figure this out, you have to weigh the function and appearance of these high-tech devices. Let’s take a look at four home assistants that work well and look good doing it. 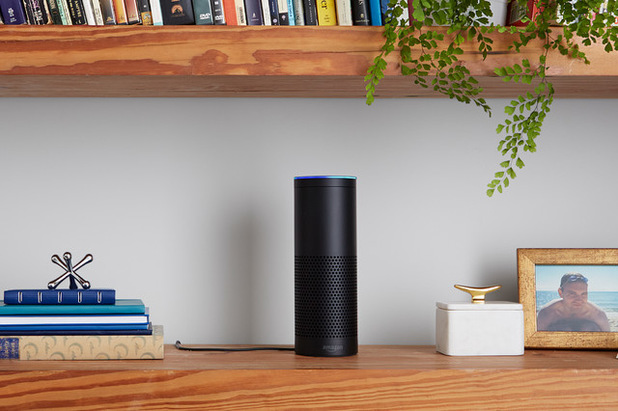 The Amazon Echo is an internet-connected device that gives you access to Amazon’s virtual assistant, called Alexa. The Echo is capable of playing music and answering miscellaneous questions (“Alexa, what’s the weather like?”), and it can even place shopping orders on Amazon.

Alexa was primarily designed to make life easier for its users, and users have seen that having the beginnings of a “smart home” isn’t as complicated as they originally thought.

Julia Fain of Huntersville, North Carolina, received an Amazon Echo as a Christmas gift from family and has found Alexa to be a convenient virtual helper.

“We use ‘her’ a lot to play music: upbeat music in the morning before school and classical while our kids do homework,” Fain says. “It’s nice that we can easily say, ‘Alexa next,’ to skip songs, and, ‘Alexa, volume 3,’ to turn music down without touching it. We ask her frequently about the weather, news and what the date is [for writing down it on homework].”

The Echo resembles a cylindrical speaker. It measures a little over 9 inches tall and about 3⅓ inches in diameter, and it comes in white or black. It’s somewhat more noticeable than the Echo Dot, which we’ll discuss next.

Though it’s one of the taller home assistants out there, it isn’t overly imposing in any room, which was Amazon’s goal: to make the Echo an ambient gadget that doesn’t stick out in your home.

“I don’t mind its appearance,” Fain says. “We have the Echo in our kitchen on the countertop. It’s small enough to move if we had a formal gathering in our home, but we are a pretty casual family.” 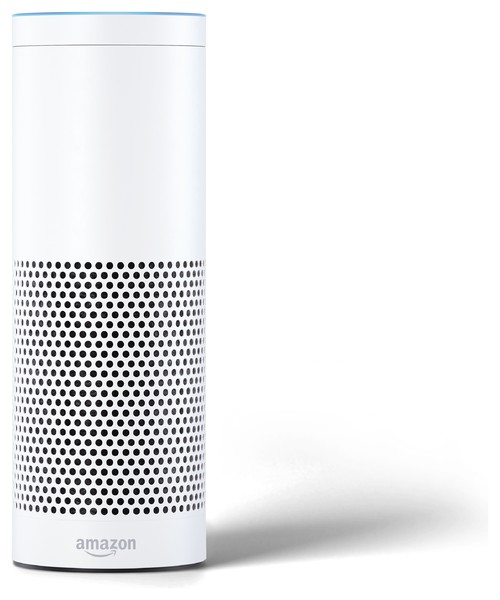 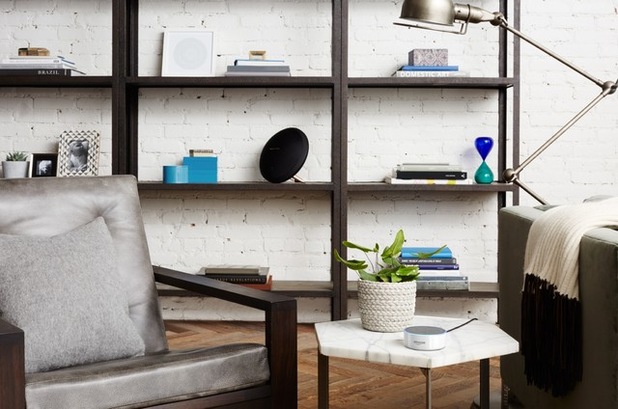 The Echo Dot is Amazon’s more compact version of the Echo. It still connects to Alexa and offers the same features, but the home assistant’s hardware is much smaller. A mere 1½ inches tall, it looks something like a small hockey puck.

The biggest difference between the Echo and the Echo Dot is the devices’ speakers. The taller Echo has room for a large speaker that wraps around the entire cylinder, providing better sound quality when playing music or replying to questions.

Matthew Anderson of Lincoln, Nebraska, says he likes the versatility of his Echo Dot. “When I have guests over, I will use it to stream music, either from a specified artist’s ‘station’ or by connecting my phone to it,” Anderson says.

Anderson also uses his Echo Dot to listen to podcasts and play Jeopardy, which is one of many “skills” you can teach Alexa.

“I use the timer-alarm function often when multitasking around the kitchen or tending to various tasks around my condo,” Anderson says. “Heck, I’ll often ask Alexa, ‘What time is it?’ if my hands are busy with kitchen stuff and I don’t want to touch my phone.”

The Echo Dot’s speaker is much smaller and is located on top. While the sound quality is still good (full disclosure: I own one and have no complaints about the sound quality for basic, everyday use), it’s not quite as good as the original Echo’s.

To make up for this, the Echo Dot has an audio output jack, so you can attach an external speaker to improve the sound quality of your music.

The Echo Dot’s size means that it looks at home in nearly any setting, regardless of the decor. [Browse rustic coffee tables for your Echo Dot.] It is also available in white or black, and its low profile means that unless your guests hear it speak, they probably won’t even know it’s there.

“I just learned there are fabric-faux wood cases for the Dot now, but the aesthetics aren’t worth [the money] to me,” Anderson says. 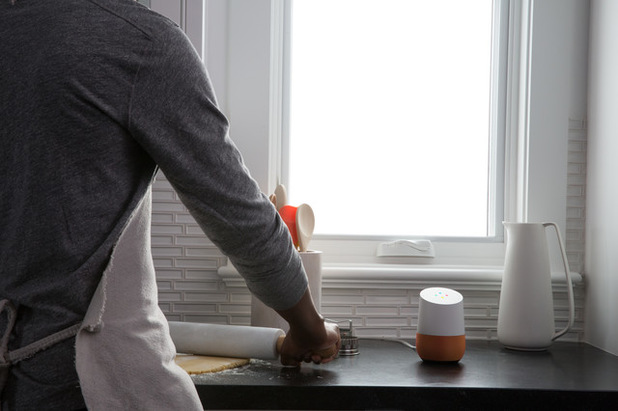 This voice assistant is Google’s first foray into the home assistant market.

Google Home responds to the same voice commands as your Android phone’s assistant (“OK Google”) and works with the Google infrastructure.

“I really like how receptive it is to my voice,” says Google Home owner Sammy Purcell of Mountain View, California, noting that the device is able to pick up her voice if she gives it a command from another room.

Purcell uses her Google Home for many different tasks around the house, even letting it talk her husband through making French toast with step-by-step instructions.

“But most often I use it to entertain and educate my 2-year-old son,” she says. “We use it for music a lot, and he’s obsessed with asking Google — or “Googoo,” as he calls it — to make a variety of noises. We started with animal sounds and [have since] evolved to different musical instruments and various vehicles like cars and trains. It makes my life easier because sometimes Mommy doesn’t know what sound a lemur makes, and my imitation of a train horn is not very accurate.”

Google Home recently gained the ability to detect different voices, so if you and your spouse each have events scheduled for the day, it will be able to remind each of you about your events by recognizing your voices.

Google Home has a single speaker (located around the bottom half of the product) and a customizable base, meaning you can make it match nearly any decor or color scheme you want. There are even third-party services that have started designing skins for the top portion of Google Home devices, so you can give the gadget a wooden, metal or leather look.

The advanced customization options of Google Home’s aesthetics may make it more desirable than other home assistant products.

The device itself isn’t as tall as the Amazon Echo, coming in at about 5⅝ inches, but its base is slightly wider, making it more stable and less likely to fall over. The body of the Google Home is white by default, and the stock base is a slate gray. But you can easily remove the base, which is only attached with magnets, and replace it with whatever color best fits your home.

Purcell says she really likes the way her Google Home looks. “We just own the standard gray-silver base model, but it looks really clean and sleek in our kitchen,” she says. “It’s pretty subtle and not garish or gaudy one bit, but stands out just enough that people will notice it and ask us about it.” 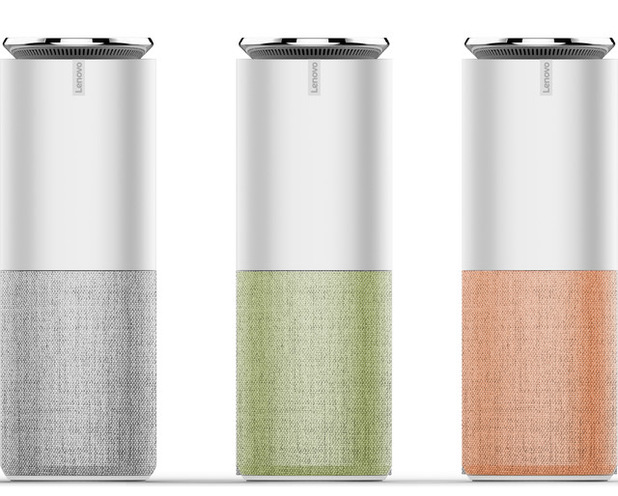 At first glance, you might think that the Lenovo Smart Assistant is an Amazon Echo clone — its operating system is even powered by Alexa. But some might say it brings together the best of Echo and Home into one neat package.

The Lenovo Smart Assistant has been demonstrated at events around the country and is expected to be available in 2017.

The biggest physical difference between the Lenovo device and other smart assistants is its speakers. According to industry experts, such as CNET, this home assistant has some of the best speakers in the market, making it a good choice for playing music anywhere in your home.

Being outfitted with Alexa, it also includes all the same voice command options that you can access with the Echo and Echo Dot. Lenovo Smart Assistant can pick up your voice from more than 16 feet away and cancel out background noise so you aren’t constantly shouting “Alexa!”

These Home Assistants Are Just the Beginning

With major tech companies vying for success in the home assistant market, it’s only a matter of time before we start to see some new options. Expect to see smaller startups popping up in this industry, likely bringing more trendy-looking smart home devices with them.

Tech companies have already figured out how to make virtual assistants more practical for everyday consumers. Next, they’ll refine the aesthetics of these gadgets to fit consumer design preferences too.

Your turn: Are you using one of these assistants or other “smart home” technologies? Please tell us about it on Facebook or Twitter. 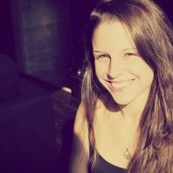 App junkie and self-improvement enthusiast. I also write for Curbed, Inman, VentureBeat and VICE. You can read more posts from me on my blog, ProductivityBytes.com 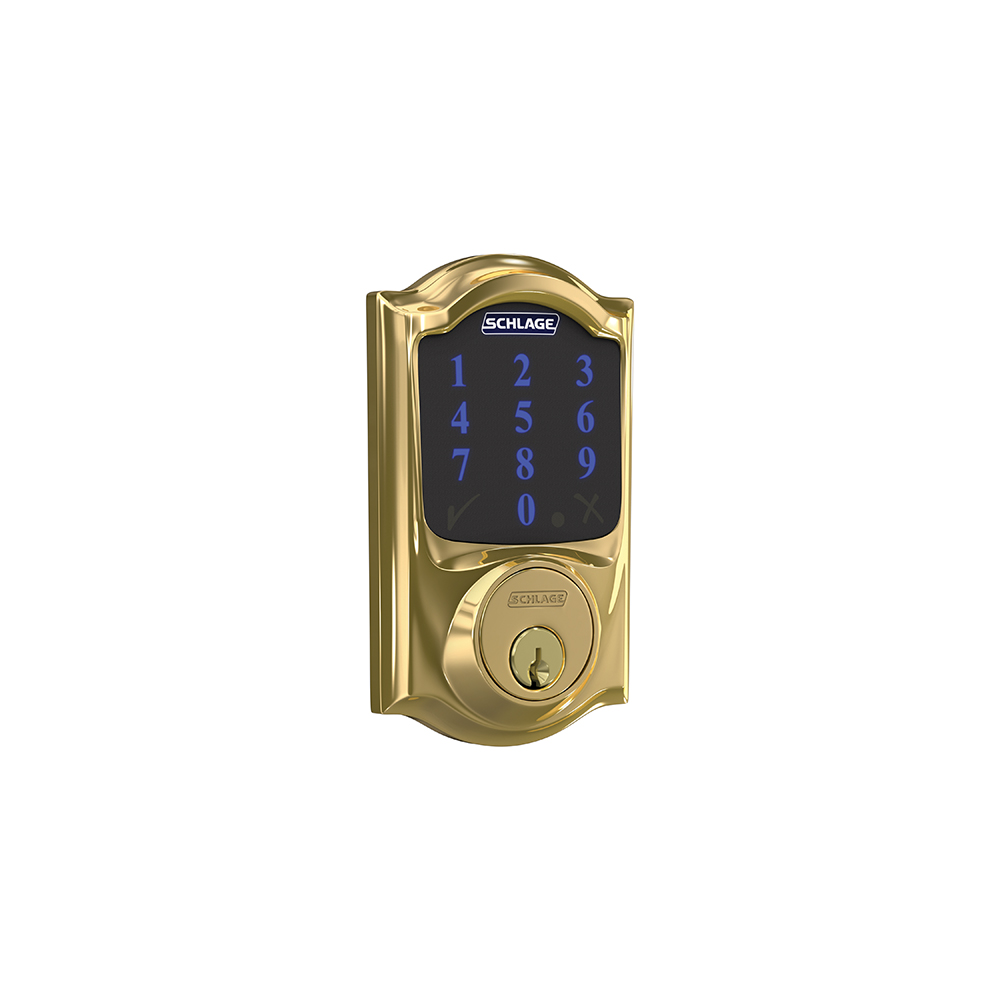 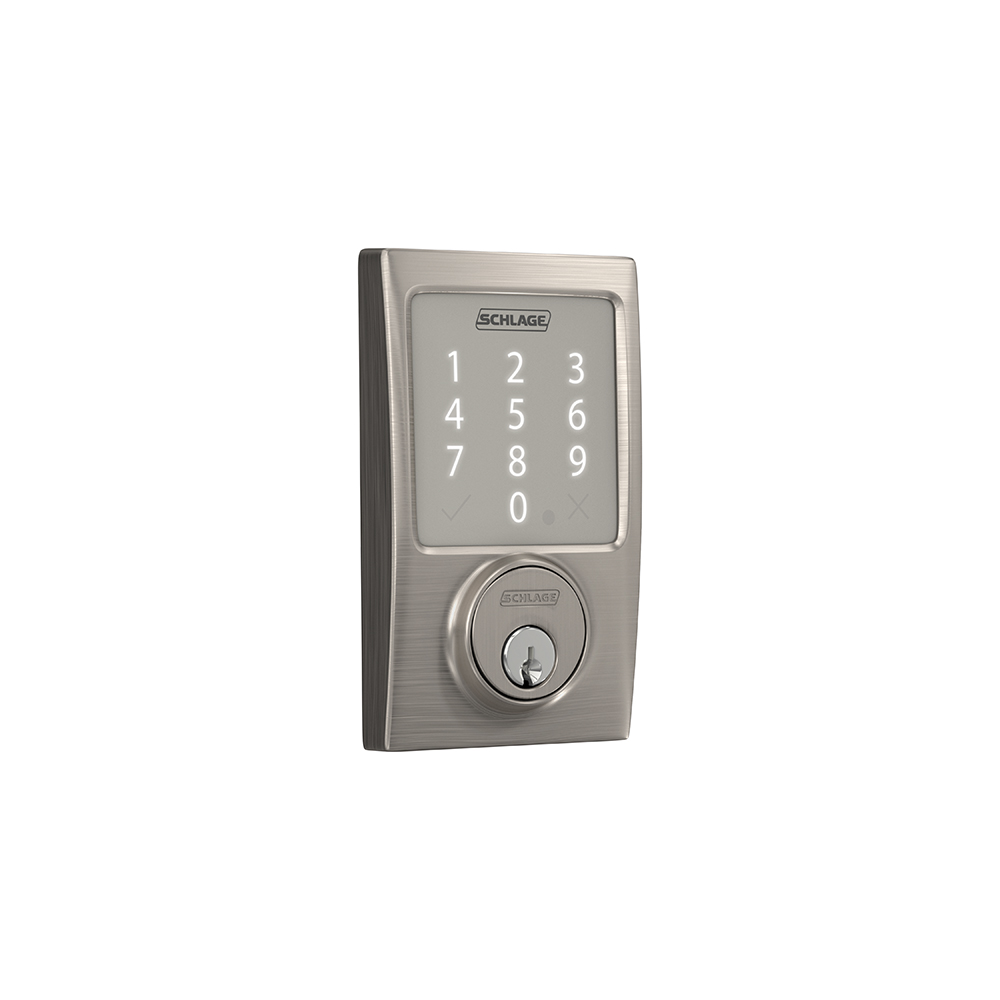 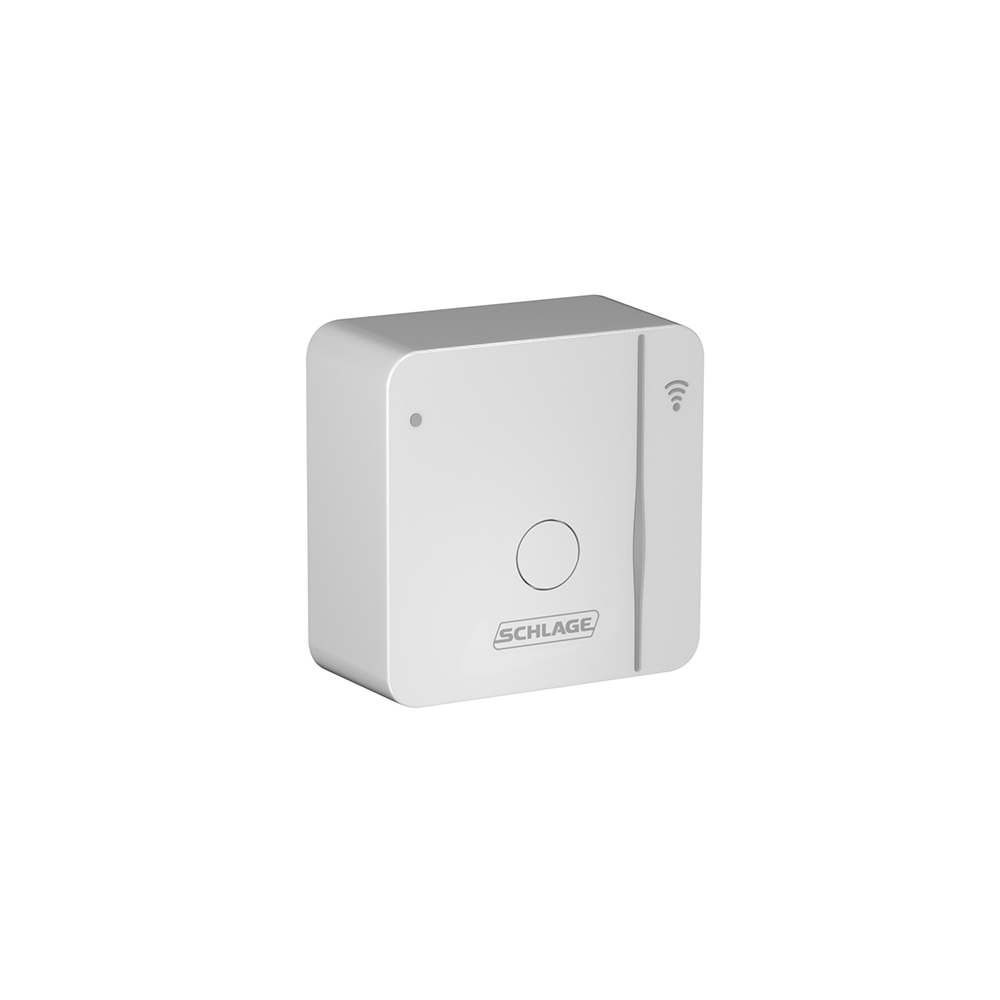